The glorious sound of leather upon willow has rung out each summer in the beautiful Cotswolds village of Broadway for over 130 years. Broadway provides the ideal location for sleepy spectators to relax on all manner of deck chairs and wile away the afternoon hours disturbed only by the occasional cry of “How’s That”

The club celebrated its centenary in 1977 with a cricket week at its picturesque ground which is situated in the Snowshill Road, just past St Edburgha’s church.  However, the club’s original ground was on land behind Russell House – where the Lifford Gardens estate is now built. It was to this ground J.M.Barrie brought the famous Allahakbarries Xl in 1897 – 1899 to play against a village team captained by Mary Anderson, the grandmother of our club President Michael de Navarro.

However, the village was playing cricket on this site many years before. (There is an early scorebook which shows that in 1832 and for several years Broadway and Evesham played as a combined side against other towns and villages in the area, but we do not know where the home matches were played). However, as you can see below, scores were rather lower than current games. 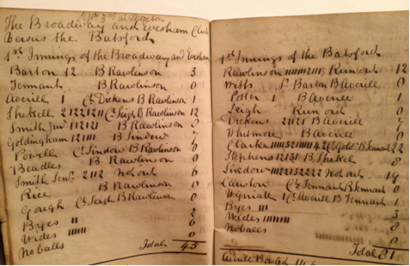 The club moved to our current Snowshill Road ground in the 1900s which at this time was also used by the village hockey team. On this site there was a famous thatched pavilion, later tiled, with of course very basic facilities, no running water and no electricity. Below is a picture of the previous pavilion at Snowshill Road, taken in circa 1958. 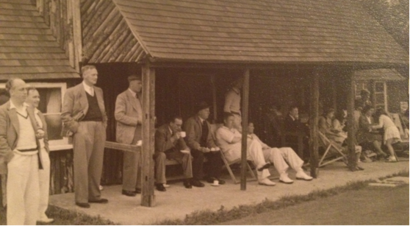 In the years before the 2nd World War the village team was formed by the gentry of the village but with the appointment of the village Schoolmaster, A.J.Bridgeman as Chairman, several of the village “boys” played in the late 1930s – other villagers played cricket at Buckland, Stanton or Stanway.  With the advent of the war the club’s activities were greatly reduced. However, in 1946 under the Chairman A.J.Bridgeman and Secretary R.Tandy, the club was quickly revived with the return of the young men from the war.  An open membership saw over 30 playing members and with working parties the ground was soon fit for cricket. (Incidentally at that time and for some 25 plus years, membership was restricted to residents living in the postal district of Broadway).

Two teams played regular matches on Saturdays and weekday evenings. The ground was rented from the then owners of the Middle Hill Estate at a rent of £10.00 per annum with a firm restriction that no Sunday cricket could be played on the ground, so Sunday games were always played away.  At that time entry to the ground was by a single footpath from the Snowshill Road, water for teas was carried in an urn from adjacent properties – water and electricity being connected in the 1950s.  Any water for the wicket preparation was taken from the brook in Coneygree Lane.

It was at this time the ownership of the Middle Hill estate changed, Sunday cricket was allowed and the new tenant farmer agreed with the club that the ground could be enlarged – an additional length at the Snowshill end, additional ground at the top of the field and a large area at the rear of the pavilion and the entrance could be enlarged. The driveway was created with rubble delivered weekly from the demolished Honeybourne Airfield and levelled by members at the weekend. With some 100 loads the work took several months!

A bar licence was obtained and some 30 plus members used the pavilion every Friday throughout the year.  A weekly draw was held, members selling tickets each week with the aim of building a new pavilion. Plans were eventually agreed, planning permission obtained and with a grant from the Playing Fields Association the new pavilion was built by a local builder C.Steward & Son and finally opened in 1969.  When the Middle Hill was put up for sale the club, as tenant, was offered the opportunity to purchase the freehold at a much reduced cost. Additional funds were quickly raised - with a big sponsored walk, donations etc. and the deeds were eventually signed on 15th October 1980.

In the 1950s, 60s and 70s particularly, the club was very much involved with every organisation and event in the village – Parish Council, Lifford Hall and Jubilee parades etc. The club team was basically formed from the village, but we were fortunate in 1950 when the new village doctor, an ex Cambridge Blue, Dr W.R.Juckes, came to the village. His reputation and ability soon became known with all our opponents and throughout the Vale and he began a long association with the club, later becoming Secretary, Chairman and later President. Over the years several interesting games have been held at the ground –1950s Worcestershire player Reg Perks' benefit, Papa New Guinea, Zimbabwe and Kenya who were playing pre-World Cup tournament games.

The club was a founder member of the Cotswold Hills League in 1981 and matches are played by both 1st Xl and 2nd Xl teams every Saturday throughout the summer and friendly matches on Sundays.  For several years now the Club has also arranged a week’s cricket tour.

In 2010 the club was involved with the Broadway Arts Festival holding a cricket match against an Artist’s Xl (re-living the famous J.M.Barrie matches of the 1890s) on the final Sunday of the Festival. Kevin Telfer the author of  the book “Peter Pan’s 1st Xl – the Extraordinary Story of J.M.Barrie’s Cricket Team” played in the match which created a great deal of interest.

Finally we must not forget our faithful band of tea ladies, some of whom have been serving teas at Broadway for over 50 years their speciality being homemade cakes. Cricket would not be cricket without cricket teas!

Details of Data Controller are